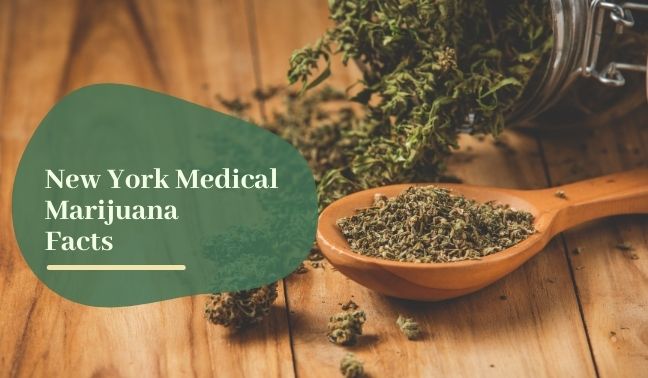 New York has a history of being a hard-core endorser of marijuana criminalization, until recently. It was only in the recent decade — 2014, to be more specific when New York finally legalized medical marijuana for meeting the expanding needs of the patients.

In 2021, the topic regarding medical marijuana got a further leap with the groundbreaking Marijuana Regulation and Taxation Act (MRTA). Read out next to know about the important facts about medical marijuana in New York.

The first law sanctioning medical marijuana requirements for medical usage was passed in June 2014. This act, known as the Compassionate Care Act, had given New York state residents legal access to medical marijuana for mitigating the effects of various diseases and health conditions.

Anyone who qualifies for the given provision and health condition can buy medical marijuana with proper documentation. However, this law was marred with limitations because of some of the stringent restrictions it imposed upon the user.

In August 2017, the New York State Department of Health outlined a new set of regulations that considerably expanded the state’s Medical Marijuana Program, for the sake of improving the use- experiences of the patients, practitioners, and registered organizations for good. It set a series of changes like:

The most revolutionary change in the cannabis history of New York can be attributed to the Marijuana Regulation and Taxation Act (MRTA) of March 31, 2021, signed by Governor Andrew Cuomo.

The MRTA covered everything under its umbrella — from medical marijuana (MMJ) to cannabinoid hemp, and legalized recreational use of cannabis by adults, i.e., anyone above 21 years old.

The legislation also established a new Office of Cannabis Management (OCM) with the Cannabis Control Board –made up of five members– sitting at the apex to monitor and implement this new legislation.

The OCM will also oversee the State’s existing Medical Marijuana Program, previously regulated by the Department of Health (DOH). The OCM will ensure a smooth and easy transition for all certified patients, designated caregivers, and practitioners; regulate licensure, cultivation, manufacture, distribution, sale, and taxation of all forms of marijuana.

The MRTA is like an incremental act to the previously existing Compassionate Care Act and is determined to bring better advancement to the Medical Marijuana Programme by enlarging infrastructure development. The new provisions of MRTA include the following changes.

All those conditions which severely obstruct the daily functioning of an individual or pose serious life-threatening risks are included in the eligibility list. The conditions or diseases for which you may qualify as a medical marijuana patient is extended and limited to include the following:

The list further clarifies that any additional condition accompanying or complicating the symptoms of any aforementioned conditions ( like severe nausea) also qualifies for medical marijuana once certified by the practitioner.

The definition of “practitioner” has been modified and refers to any medical specialist who is licensed, registered, or certified by the New York state to prescribe controlled substances (medical marijuana) within the State.

The practitioner will be eligible to prescribe only when he has completed at least one-two to the four-hour course as deemed fit by the commissioner. The educational structure of that particular course must include — the pharmacology of marijuana; contraindications; side effects and reactions; overdose prevention; drug interactions; dosing and routes of administration; risks and benefits; warnings and precautions; abuse and chance of dependence. Medical practitioners who can certify patients with a medical marijuana recommendation are:

So every medical professional you know like family physicians, oncologists, neurologists, psychiatrists, rheumatologists and other specialized physicians that work in internal medicine or emergency care and have taken the specified course can certify you with medical marijuana in New York.

Designated caregivers, however, also need to apply and avail a valid registered identification card. Only after registration can they assist you with the possession, acquisition, delivery, transfer, transportation, and/or administration of approved medical marijuana products.

The legal amount of medical marijuana that you can possess if you are a certified patient has been increased from a thirty (30) day supply to a sixty (60) day supply and depends on the recommendation of your practitioner. Some of the famous options available to current patients are :

Some examples of medical marijuana products are:

The MRTA will also repeal the ban on smoking of medical marijuana, lift the prohibition on whole cannabis flower and approve it as a form of medical marijuana too. The act has also permitted the private cultivation of marijuana by certified patients or their caregivers who are above 21 years of age for medical use.

Government regulation of medical marijuana has also helped enhance quality, control, and consumer protection benefits. When you buy self-medicated marijuana from the unregulated market, you are most likely to bring a hazard with you — not only the potency and safety measures of the product are in question but they might also contain harmful contaminants (fungi spores, pathogens, heavy metals, pesticides, etc) potentially causing more unsettling experience. A regulated environment most importantly mandates the labeling of medical marijuana products with content of THC and CBD.

Medical marijuana is also booming as an option to curb the crisis of the opioid epidemic in NYS. In NYS, “overdose deaths involving opioids increased by about 180 percent from 2010 (over 1,000 deaths) to 2016 (over 3,000 deaths)”. The approval to use medical marijuana as the new treatment for chronic pain and opioid use disorder has drastically decreased accidental as well as international opioid overdose.

The negative health consequences of medical marijuana are also proved to be lower than other substances like alcohol, tobacco, and narcotics including heroin and cocaine. In fact, since the beginning of the Medical Marijuana Program, there have been mere 27 reports of adverse incidents out of 300,000 transactions.

Usage of medical marijuana has never resulted in death, and it offers an easy transition to the next best treatment option without any problem, in case of adversity. The legalization of marijuana also inevitably means lowered obstruction in the path of research in NYS which will, in turn, enable the State to add to the knowledge of both the benefits and risks and further revamp its medical marijuana program.

If you are wondering how to get all these medical marijuana benefits lawfully and start relishing your life again, we are here to help you. As the first step, you can have a walk-in consultation with a registered practitioner and get certified for your condition.

Next, you must register with the Medical Marijuana program through the online Patient Registration System offered by the health.ny.gov/mmp and get a registry ID card. You can then use your temporary or permanent registry ID card to purchase and obtain medical marijuana products from registered dispensaries in the city.

For a more streamlined, quick, and simple process, please visit https://nymarijuanacard.com/. Our doctors will give you greater access and varied options to medical marijuana products and dispensaries without any extra hurdles for sure.