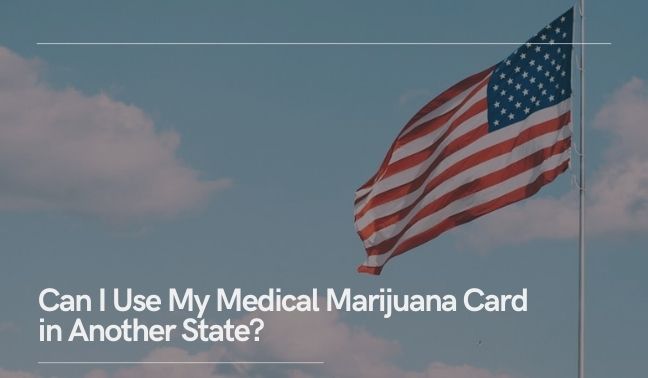 Are you looking for medical marijuana? Using marijuana has become legal in more than half of the United States. However, many people still ask questions about consuming medical marijuana in another state. Every state has its own set of rules and regulations that no resident can break.

In simple words, if the other states do not allow medical marijuana, no matter what documents you present or even if you consume it for medical purposes, it will be considered illegal.

Aside from this, even if you are consuming marijuana by having a NY medical marijuana card in a state where it is not legal, you will be held accountable for your actions. Other than that, flying with medical marijuana is entirely risky. The passengers are checked at the airport via Transportation Security Administration, a federal agency governed by federal law.

You might be allowed to travel to one of the states that permit medical marijuana and its usage while you are in the state. Foremostly, you need to prove that your medical conditions require marijuana treatment. However, using medical marijuana varies from one state to another.

Many states require residency proof, while others do not. Almost all the states have a medical marijuana program in place or implemented soon for permanent residents. Reciprocity is the only way to attain medical marijuana cards in another state.

What Is Medical Marijuana Reciprocity?

States Where Medical And Recreational Marijuana Is Illegal

Nebraska is one of the states where cannabis is illegal in all forms, be it creational or recreational. However, Senate Judiciary Committee has approved a bill to make cannabis legal for medical use.

State law allows a traveling patient with a registered identity card issued by the qualifying home state to use medical marijuana. Although, the patient is not allowed to visit a dispensary to purchase medical marijuana as the state will be required to do the verification before distributing the medical cannabis. Proposition 203 and Chapter 28.1, 36-2801 Sec 17 for more details.

Only permanent residents of Arkansas are permitted for the registration ID card for the state Medical Marijuana Program. However, you can apply as a visiting patient in the state. A patient traveling to Arkansas can fill an application that costs $50.00, which cannot be refunded. If your application gets approved, you are permitted to consume medical marijuana in the state. The application and registration are only valid for the next 30 days. You can check out the Arkansas medical program for more details.

California is the state, which does not have any reciprocity program for patients, but it allows outsider patients to get medical marijuana by applying for an MMJ card to make the legal purchase from the dispensaries.

The visiting patients can apply for DPHSS by acquiring a written certification from Guamanian healthcare to become a qualified patient. You have to pay $15 as the registration fee.

The outsider patients can apply for the application fee, paying $49.50. However, you need to apply for this at least 60 days before visiting here. The patients who will qualify will attain the registration card digitally.

Patients who travel to Maine with a valid MMJ card can buy medical marijuana. However, it requires patients to get certification from a licensed doctor in Maine. If this is not possible, they can also get a caregiver assigned to purchase medical marijuana from the dispensaries. Hence, adults aged 21 above can purchase marijuana up to 2.5 ounces.

If the patient is from another state, they can apply to attain medical cannabis through registration. For more information, you can check out the official website of Maryland Medical Cannabis Commission: Registration.

Michigan rules are the same for the outsider who is visiting this state. It usually treats all the patients. However, the consumption of medical marijuana publicly is prohibited in this state.

The state only allows consuming medical cannabis if you come from another state. It does not permit you to purchase it within the state.

On August 5, 2019, a New Mexico judge stated that the Department of Health had to issue a medical cannabis card to non-residents because of their qualified card when it was changed as the Compassionate USe Act in March 2019. The non-residents can consume medical marijuana in another state with the reciprocity program.

Oklahoma gives a temporary adult patient license to the patient who travels from one state to another to legally purchase, consume and grow medical marijuana. However, the person must have a valid medical marijuana license.

Puerto Rico is one of the US significant states that permits visitors who have valid authentication and medical marijuana card of their permanent states to consume medical cannabis.

If you are coming from another state and have valid authorization to consume medical marijuana, you must consider some of the following things. You must bring two valid government ID cards; you must be in the state database that tracks sales of permitting states in New York. Lastly, you will be permitted to consume around 2.5 ounces of medical marijuana by an equivalent form every 15 days.

Washington D.C. permits medical and recreational uses of medical marijuana as long as the patient is above 20 years. However, the possession limits are oz of flower, 16 oz of edible, 7 oz of concentrate, and 72 oz of liquid.

Many states have no reciprocity, but they require valid ID proof of the residents to obtain medical marijuana services. Each state has its own set of rules and regulations for reciprocity. However, if any state does not have such laws, it means that the traveler is not permitted to consume medical marijuana in any condition.

Does New York Accept Out of State MMJ Cards?

Some states offer reciprocity, but New York is not one of them. Hence, it is widely essential to check all the needed information before visiting there. If you go against the federal laws, you will be accountable for criminal charges, fines, and jailed for several years, as per the state laws.

If you are a medical marijuana patient, you must know the rules and regulations of the state you are traveling to, especially when there are multiple rules and regulations. Cannabis-related medications are approved and accredited by the Food and Drug Administration available to the cardholders. To prevent complications and criminal charges, you must check the regulations and reciprocity of the country, state, or region before you visit there.